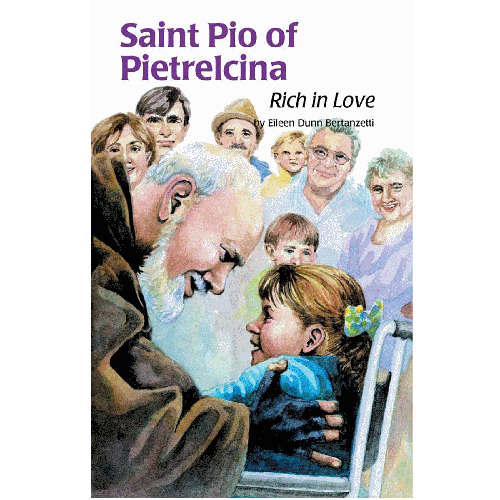 Francisco Forgione was born on May 25, 1887 near Naples, Italy. On January 6, 1903, Francisco entered the Capuchin community in Morcone. He was given the name Brother Pio. He was ordained a priest in 1910 and assigned to his own parish church to assist his pastor. It was during this time that Padre Pio received a special grace. In order to be more like the suffering Jesus, he began to feel the nail marks of the crucifixion in his hands and feet, and the spear wound in his side. After a while they became permanent, but were invisible. On September 20, 1918, this stigmata would become visible and last for fifty years until his death. After seven years in Pietrelcina, Padre Pio was sent to the Capuchin friary in Foggia. He began hearing confessions and soon crowds of people were coming to him for advice. In July of 1916, Padre Pio's superiors sent him to San Giovanni Rotondo, a remote village where they hoped he would have some peace and quiet. He was experiencing extraordinary gifts from God. He could read souls, and was even able to help people in confession by reminding them of details he could only have learned from God himself. He also had the gift of bilocation and his stigmata gave off a fragrance of roses and violets. Padre Pio's superiors questioned whether or not these special gifts were real. In case they were a hoax, Padre Pio was forbidden to celebrate Mass in public and to hear confessions. This was a heavy cross for him, but he accepted it as another opportunity to be like Jesus.

After a while, he was again permitted to administer the sacraments, and once again vast numbers of people crowded the church for his hearing confessions and giving hope and encouragement to countless people from all around the world. He did this right up to his death on September 21, 1968. He was declared a saint by Pope John Paul II in 2002. Those who read the story of Saint Pio will discover the advice he gave to so many during his life: "Pray. Hope. And don't worry." In a particular way, this saint teaches us the meaning of suffering, and his life can be of great consolation. A child will also discover in a new way the gift of the sacrament of Reconciliation.

Add to Wish List
Read a Sample
About this item
Format:
Paperback
Pages:
120
Dimensions(Inches):
4.25 x 7.00
Reviews
Write Your Own Review