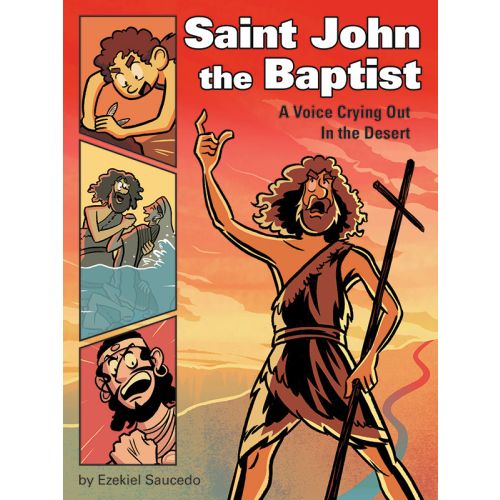 Saint John the Baptist: A Voice Crying Out In the Desert

John the Baptist is a central figure in salvation history. A cousin and friend to Jesus, and the true forerunner of Christ, his life of simplicity, humility, and fidelity continues to fascinate and inspire. John prepared the way for Jesus, announcing to the people that the Messiah was coming, and when Jesus appeared, he willingly gave up his influence and told his disciples to follow Him.

Hebrew prophets had said that John's ministry would pave the way for the coming of Jesus--Isaiah spoke of someone who would cry out in the wilderness and make a highway for God; Malachi spoke of a messenger who would prepare the way. As messengers go, John was a colorful one, arrayed in a "camel's hair" garment secured by a leather belt, and subsisting on a diet of locusts and wild honey. He acknowledged the perfection of Christ and was an important part of the heavenly plan. He didn't seek people out, but they flocked to him.

Presented as a graphic novel, The Voice in the Desert is sure to interest even the most reluctant reader. Filled with colorful characters and lots of action, it's sure to capture young peoples' interest and imagination. Perfect for children in grades 4-6.

Add to Wish List
About this item
Format:
Paperback
Pages:
128
Dimensions(Inches):
6.00 x 8.00
About the author
About the Author:

Written and illustrated by Ezekiel Saucedo
Reviews
Write Your Own Review