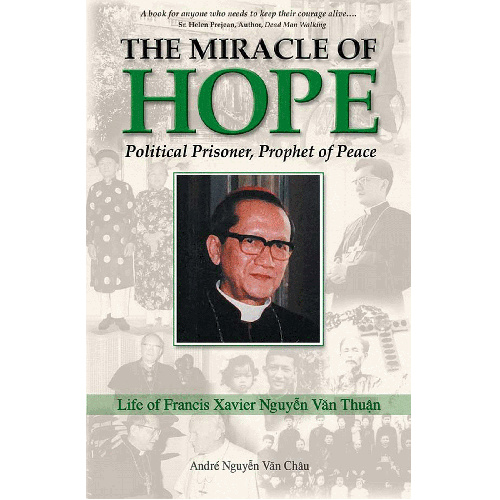 Vanchau Andre Nguyen
Be the first to review this product
$18.25
Item Code
115976
EAN/UPC
9780819848222
Publisher
Pauline Books & Media B
Written by a personal friend of Cardinal Thuan, this moving biographycontaining over 70 photographs and writing excerptschronicles the life of the man Pope John Paul II said was marked by a heroic configuration with Christ on the cross. From a prisoner in a communist jail cell to a leader of the Pontifical Council for Justice and Peace in Rome, Francis Xavier Nguyen Van Thuan remained a man of unshakable faith and undying hope.

In 1975, Cardinal Francis Xavier Nguyen Van Thuan was arrested by the Communist government of Vietnam and imprisoned for thirteen years, nine of them in solitary confinement, and finally exiled from Vietnam in 1991. He continued to proclaim the gospel of peace and freedom, justice and human dignity until his death in 2002. Destined to become contemporary classics, Van Thuan's writings have inspired hope in millions. His best selling works include Testimony of Hope and The Road of Hope.

Add to Wish List
Read a Sample
About this item
Format:
Paperback
Pages:
244
Dimensions(Inches):
6.00 x 9.00
About the author
Andre Nguyen Van Chau was born in the Citadel of Hue, the old capital of Imperial Vietnam. He grew up with classmates who have become known writers, poets, composers and painters. After obtaining a doctorate degree in the humanities at the Sorbonne, Paris, he taught English and creative writing at various universities in Viet Nam for twelve years. In 1975 he began twenty-five years of work for migrants and refugees around the world, ten of which were spent at the head of the International Catholic Migrations Commissions with 84 national affiliates and with headquarters in Geneva, Switzerland. He has traveled and worked in over 90 countries. Back to the United States after Geneva he was for ten years the Director, Language and Accent Training at ACS, then Xerox before retiring in Austin, Texas and beginning a new career as a full-time writer. One of his published works, The Miracle of Hope, the official biography of late Cardinal Nguyen Van Thuan, has been translated into nine different languages.
Available Digital Formats
Endorsements

"A superb account of the life and spirituality of one of the great Catholic leaders of our time."
His Eminence Cardinal Roger Mahony, Archbishop of Los Angeles

"The Miracle of Hope charts the footsteps of a man who walked the long road of hope, urging us on amidst the darkness of our own time and place. He is an icon of the Vietnamese Catholic Church."
Michael Downey, Author, Hope Begins Where Hope Begins

"Even to his last breath, Van Thuan breathed the Gospel, which was the tranquil force of his entire life."
His Eminence Cardinal Roger Etchegaray, President Emeritus, Pontifical Council for Justice and Peace

"Cardinal Van Thuan is a prophet for Gospel justice and peace. His story is a biography for our times."
Rose Pacatte, FSP, Author, Lights, Camera... Faith!

"Despite the numerous trials he endured, the triumph of Cardinal Van Thuan's hope is the miracle he has passed on to humankind. An inspirational journey!"
Dr. Elvira di Fabio, Harvard University

"Living the horror of war in his native Vietnam, Van Thuan knew war's waste of human potential. His extraordinary life assures us that in the end, only holiness matters. To read these pages is to make a retreat with a saint."
Murray Bodo, OFM, Author, Poetry as Prayer: Denise Levertov

"At last, an authoritative biography of a man being venerated the world over as a martyr of the Christian faith. His was a living testimony: suffering can be a source of intimate union with God and loving solidarity with one's fellow human beings."
Dr. Peter C. Phan, Georgetown University

Known to many Catholics through his writings (Testimony of Hope; The Road of Hope), Vietnam's late Cardinal Francis Xavier Nguyen Van Thuan's amazing story is told by a former fellow seminarian who knew him from the time the cardinal was 18. Chau initially declined the cardinal's request to write about his life, but in 1999, reluctantly agreed, finishing the book just a few months before the cardinal died in 2002. Chau has meticulously chronicled Cardinal Thuan's life and that of his prominent family, which paid dearly for its involvement in the quest for Vietnam's independence. To help the reader navigate through a complex cast of characters, Chau has included a glossary and an explanation of Vietnamese personal names. He portrays Cardinal Thuan as a humble man who gladly would have served as a rural pastor, but was marked for leadership in the church early on. Even as he prepared for this role studying in Europe, Cardinal Thuan had a premonition that he would suffer martyrdom, and indeed, after being named coadjutor archbishop of Saigon in 1975, he was arrested by Communist authorities. Thuan subsequently spent 13 years in prison, which shaped his spirituality and leadership. Although this is not a critical biography, but the work of an admirer who also wrote a biography of the cardinal's mother, it serves to introduce one of Vietnam's most venerable religious leaders to a wider audience.
From Publishers Weekly, Copyright 2003 Reed Business Information, Inc.
Reviews
Write Your Own Review