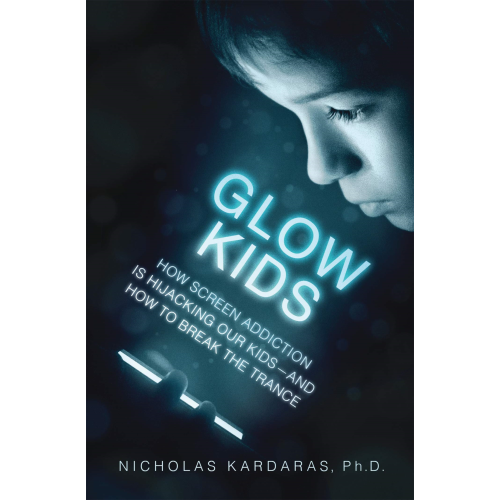 Kardaras Nicholas
Be the first to review this product
$26.25
Item Code
195087
EAN/UPC
9781250146557
Publisher
Ingram/Spring Arbor
From addiction expert Dr. Nicholas Kardaras comes a startling argument that technology has profoundly affected the brains of children―and not for the better.
We’ve all seen them: kids hypnotically staring at glowing screens in restaurants, in playgrounds and in friends' houses―and the numbers are growing. Like a virtual scourge, the illuminated glowing faces―the Glow Kids―are multiplying. But at what cost? Is this just a harmless indulgence or fad like some sort of digital hula-hoop? Some say that glowing screens might even be good for kids―a form of interactive educational tool. Don't believe it.
In Glow Kids, Dr. Nicholas Kardaras will examine how technology―more specifically, age-inappropriate screen tech, with all of its glowing ubiquity―has profoundly affected the brains of an entire generation. Brain imaging research is showing that stimulating glowing screens are as dopaminergic (dopamine activating) to the brain’s pleasure center as sex. And a growing mountain of clinical research correlates screen tech with disorders like ADHD, addiction, anxiety, depression, increased aggression, and even psychosis. Most shocking of all, recent brain imaging studies conclusively show that excessive screen exposure can neurologically damage a young person’s developing brain in the same way that cocaine addiction can. Kardaras will dive into the sociological, psychological, cultural, and economic factors involved in the global tech epidemic with one major goal: to explore the effect all of our wonderful shiny new technology is having on kids.
Glow Kids also includes an opt-out letter and a "quiz" for parents in the back of the book.
Add to Wish List
About this item
Format:
Paperback
Pages:
304
Dimensions(Inches):
6.00 x 9.30
About the author
Dr. Nicholas Kardaras is an internationally renowned speaker, one of the country’s foremost addiction experts, and CEO and Chief Clinical Officer of Maui Recovery in Hawaii and Omega Recovery in Austin, TX. A former Clinical Professor at Stony Brook Medicine, he has also taught neuropsychology at the doctoral level and is the author of Glow Kids (St. Martin's Press, 2016) and How Plato and Pythagoras Can Save Your Life (Conari, 2011). He has written for TIME Magazine, Scientific American, Psychology Today, the New York Post, Salon and FOX News, and has appeared on Good Morning America, ABC's 20/20, the CBS Evening News, FOX & Friends, NPR, Good Day New York and in Esquire, New York Magazine and Vanity Fair. Considered a leading expert on kids and digital addiction, he's clinically worked with over 1,000 teens during the last 15 years and has been active in advocating that screen addiction be recognized as a clinical disorder akin to substance addiction. He lives with his wife and twin sons between Maui, Austin and Sag Harbor, NY and is a frequent presenter and lecturer on the subjects of philosophy, mental health, and both substance and screen addictions.
Reviews
Write Your Own Review