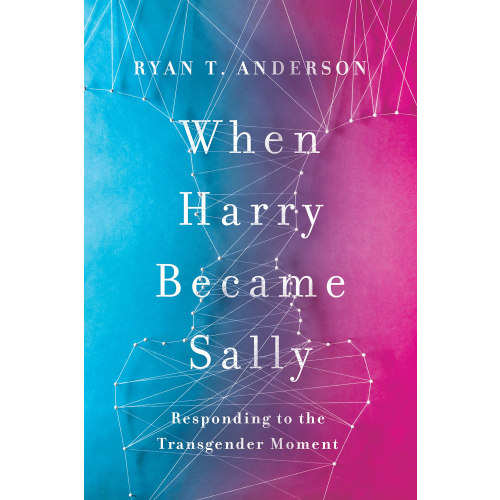 Anderson Ryan T
Be the first to review this product
$40.75
Item Code
176598
EAN/UPC
9781594039614
Publisher
Ignatius Press
The transgender movement has hit breakneck speed. In the space of a year, it’s gone from something that most Americans had never heard of to a cause claiming the mantle of civil rights. But can a boy truly be “trapped” in a girl’s body? Can modern medicine really “reassign” sex? Is sex something “assigned” in the first place? What’s the loving response to a friend or child experiencing a gender-identity conflict? What should our law say on these issues? When Harry Became Sally: Responding to the Transgender Moment provides thoughtful answers to all of these questions. Drawing on the best insights from biology, psychology, and philosophy, Ryan T. Anderson offers a balanced approach to the policy issues, a nuanced vision of human embodiment, and a sober and honest survey of the human costs of getting human nature wrong. He reveals a grim contrast between the media’s sunny depiction and the often sad realities of gender-identity struggles. He introduces readers to people who tried to “transition” but found themselves no better off. Especially troubling is the suffering felt by adults who were encouraged to transition as children but later came to regret it. And there is a reason that many do regret it. As Anderson shows, the most helpful therapies focus not on achieving the impossible—changing bodies to conform to thoughts and feelings—but on helping people accept and even embrace the truth about their bodies and reality. This discussion will be of particular interest to parents who fear how an ideological school counselor might try to steer their child. The best evidence shows that the vast majority of children naturally grow out of any gender-conflicted phase. But no one knows how new school policies might affect children indoctrinated to believe that they really are trapped in the “wrong” body. Throughout the book, Anderson highlights the various contradictions at the heart of this moment: How it embraces the gnostic idea that the real self is something other than the body, while also embracing the idea that nothing but the physical exists. How it relies on rigid sex stereotypes—in which dolls are for girls and trucks are for boys—while also insisting that gender is purely a social construct, and that there are no meaningful differences between women and men. How it assumes that feelings of identity deserve absolute respect, while the facts of our embodiment do not. How it preaches that people should be free to do as they please and define their own truth—while enforcing a ruthless campaign to coerce anyone who dares to dissent. Everyone has something at stake in today’s debates about gender identity. Analyzing education and employment policies, Obama-era bathroom and locker-room mandates, politically correct speech codes and religious-freedom violations, Anderson shows how the law is being used to coerce and penalize those who believe the truth about human nature. And he shows how Americans can begin to push back with principle and prudence, compassion and grace.
Add to Wish List
About this item
Format:
Hardcover
Pages:
264
Dimensions(Inches):
6.50 x 9.20
About the author
Ryan T. Anderson is the William E. Simon Senior Research Fellow at The Heritage Foundation. He is the author of Truth Overruled: The Future of Marriage and Religious Freedom and the co-author of What Is Marriage? Man and Woman: A Defense and Debating Religious Liberty and Discrimination. Anderson has made appearances on ABC, CNN, CNBC, MSNBC, and Fox News. His work has appeared in the New York Times, the Washington Post, the Wall Street Journal, and his research has been cited by two U.S. Supreme Court justices in two Supreme Court cases. Anderson received his bachelor’s degree from Princeton University and his doctoral degree from the University of Notre Dame.
Reviews
Write Your Own Review