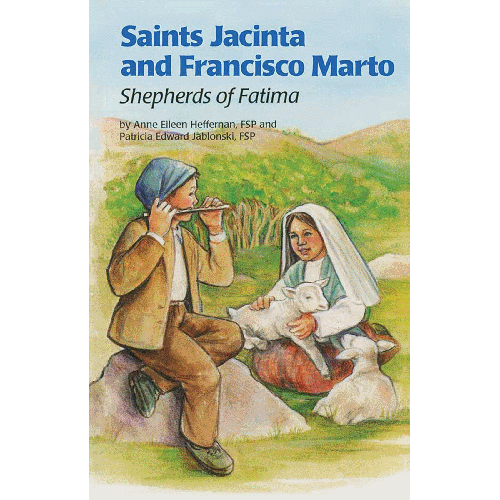 Francisco Marto was born in Fatima, Portugal, on June 11, 1908, and his sister Jacinta was born on March 11th, 1910. Beginning at a young age, the two children accompanied their cousin Lucia Santo to the fields each day to watch the families' sheep. One day in 1916, they saw an Angel, who told them he was the angel of peace and the guardian angel of Portugal. The angel appeared to them three times. These apparitions filled the children with a sense of peace and the presence of God, preparing them for the apparitions of Mary which were soon to take place.

The first apparition of Our Lady took place on May 13, 1817. Our Lady asked the children to say the Rosary and to make sacrifices, offering them for the conversion of sinners.

Seven-year-old Jacinta especially took this request very seriously. Francisco was affected by the vision in a different way; he saw how sad Jesus and Mary were, and how much they were offended by sins, and his great desire was to console them. The children began to make sacrifices for sinners, and to pray often.

In October of 1918, Francisco and Jacinta became seriously ill with the Spanish flu. Our Lady appeared to the two children and told them she was coming soon to take them to Heaven: Francisco first, and then Jacinta later.

At Francisco's request, the parish priest came to give him his first Communion. It would be his last Communion. Francisco died peacefully the next day, April 14, 1919.

Poor little Jacinta, who was still extremely ill, missed her brother greatly. Eventually Jacinta was transferred to a hospital in Lisbon, but her condition did not improve, despite a painful operation. Our Lady continued to console Jacinta with her presence, and on February 20, 1920, the little girl died in the hospital, attended only by a nurse.

Those who read the story of Francisco and Jacinta will share their excitement as they see Mary, the Mother of God. These two youngest children ever to be considered for sainthood will give any child the desire and the courage to love Jesus and to want to be like him in order to make a real difference in the world.

Add to Wish List
Read a Sample
About this item
Format:
Paperback
Pages:
144
Dimensions(Inches):
4.25 x 7.00
Reviews
Write Your Own Review